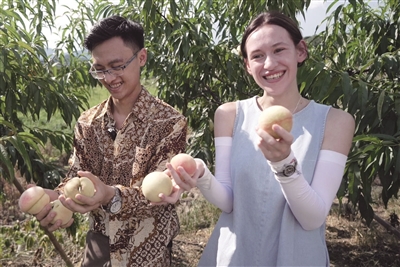 Wiratamasuhandi and Uliana at the local peach fair. (Photo by Chen Jinhui)

On a sunny day of early July, Wiratamasuhandi from Indonesia was invited by Ningbo Evening News for a fruit tour of Xinjian Village, Fenghua District in Ningbo. Therein he met Uliana Bukat, a Russian lady married to a local. Together they explored the Fenghua Peach Intangible Cultural Heritage Practice Base and local peach fair, learning about over 150 famous peach species at The Peach Street, while savoring juicy and sweet peaches. Initiatives to boost rural tourism and popularize peach cultivation as a local specialty are also means of common prosperity advancement.

Wiratamasuhandi (Wei Quanhan as his Chinese name) has been staying in Ningbo for 8 years. Graduating from Ningbo University, he is now engaged in e-commerce and translation. After several visits to Tianyi Pavilion and Gulou (Drum Tower), he has been deeply attracted by the history and culture, local cuisine and customs of Ningbo. It was the first time Wiratamasuhandi had visited Xinjian Village – known as “Home of the Chinese Peach” – and this provided the opportunity to taste the famous honey peach from one of China’s four peach cultivation bases. On the first stop of Wiratamasuhandi’s trip – Fenghua Peach Intangible Cultural Heritage Practice Base – he met the local Party chief, Tang Dunda.

According to Tang, the base covers an area of more than 1,300 mu (ca. 87 hectares) and holds annual peach festivals. The existing peach cultivation area in Xinjian Village is 1,000 mu (ca. 67 hectares) and the annual average output per mu is 1,000 kilograms, that translates into an output value of 25,000 yuan based on the current market price. Tang picked some peaches and shared them with Wiratamasuhandi who loved it from the first bite. The peach species “hujing” is one of the best, known for its sweet and juicy taste, pleasant aroma, relatively long shelf life and the fact that it can be conveniently shipped country-wide, Tang explained. The best time to enjoy it is right after picking it from the tree.

Savoring the peaches, Wiratamasuhandi headed for Peach Street where he joined Uliana, a new villager with 5 years of residence. Uliana revealed that more than 150 famous peach species were planted there, including Shimizu White Peach and Hakuhou Peach from Okayama, Japan; white peach from America; “zaohualu” and “baihua” peach species from Nanjing; “hongyanlu” and “meiguilu” peach species from Hangzhou; and tropic snow peach from Shandong. Local people continuously improve their cultivation techniques and various species of peaches are in great demand across the country.

In the packaging area, Wiratamasuhandi and Uliana learned how to pick better peaches by their size, color, and aroma. Uliana also invited Wiratamasuhandi to try one of the largest peaches he’d ever seen, which weighed about 250 grams and was almost the same size as an adult’s palm. Uliana described this kind of peach as extremely juicy and sweet. When the peach is ripe, its juice can be sucked directly from the fruit through a straw. They also experienced peach packaging with villagers, learning about how to carefully box peaches before shipment.

After experiencing the cultivation and packaging of Fenghua peaches and tasting this local specialty, Uliana mentioned a peach fair held in the village. There were several booths, including one selling local peaches through online platforms. The shopping event was livestreamed on that special day. Wiratamasuhandi and Uliana were taken aback by the large number of customers eager to place their order for peaches. They were invited as special guests to present Fenghua peaches to consumers countrywide. At the fair, many creative sideline products featuring local peaches were displayed, such as pouches with peach patterns and beautiful accessories in the shape of peaches.

Xinjian Village is 2.5 kilometers south in Xikou Town of Fenghua District, Ningbo. It covers an area of 8.6 square kilometers, with 559 registered farmer families out of a population of 1,598. Xinjian Village is dedicated to the advancement of rural cultural tourism as well as the preservation and inheritance of peach cultivation to strive for common prosperity. Ningbo Evening News organized this trip with a view to provide a unique insight into Ningbo tourism and specialties for foreign residents in Ningbo and individuals from all over the world.